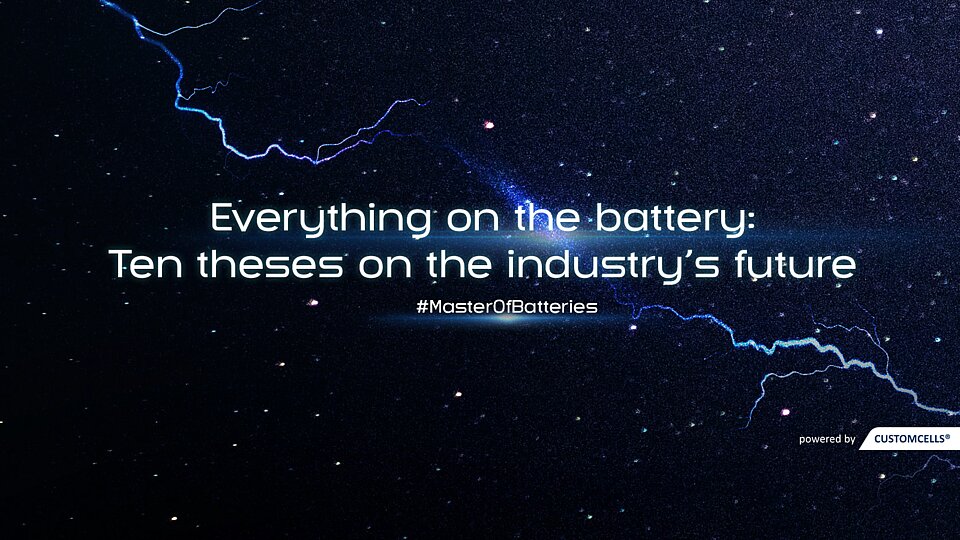 The German battery industry is growing. But where will it be a few years from now? These ten theses show what developments are taking place in the industry today. CUSTOMCELLS will celebrate its tenth anniversary this year, and Master of Batteries took this as an opportunity to ask the developer and manufacturer of application-specific battery cells about its top predictions for the future of the battery industry.

The battery industry in Germany is facing a wave of consolidation. This is one of ten theses thatCUSTOMCELLS published today on the future of the industry, and at the same time reveals which manufacturers will ultimately come out on top. With the current contribution to its international technology publication"Master of Batteries", one of the leading companies in the development and mass production of special lithium-ion battery cells uses its deep market expertise to outline, among other things, the medium- and long-term development of the battery industry in Germany and why electric flight is ushering in the next great transformation of mobility. The theses are intended to initiate a dialog in the industry and beyond.

"CUSTOMCELLS celebrates its tenth birthday this year. Others use this opportunity to look back – we, on the other hand, are looking ahead. For us, there is no question that the battery industry is developing into one of the central key industries in Germany. At the same time, we see that customers, partners and also the public are looking for guidance along the way. With our ten theses, we want to provide assistance in precisely this regard – and call for a dialog," says Dr. Dirk Abendroth, CEO of CUSTOMCELLS Holdings.

In their future theses, the specialists from CUSTOMCELLS explain, among other things, why batteries in classic housings could soon become a discontinued model, why air cabs and drones will make an important contribution to a sustainable change in transportation, and what role the solid-state battery will play in the future.

According to the theses, the demand for AI specialists in the industry is likely to increase significantly. One reason for this is a trend that is already emerging: the emergence and use of smart cell technology that can be coupled with artificial neural networks. In order to survive in an increasingly tough competitive environment, the use of artificial intelligence (AI) will also play an increasingly important role in the optimization of processes and ensure a corresponding need for personnel there. As early asMay of this year, CUSTOMCELLS called for joint work on Europe-wide standards and qualifications for the entire industry. According to estimates by the German government, more than 10,000 jobs will be created in battery production, use, and recycling in Germany alone in the coming years. With the announcement of new and future projects – especially in the field of electromobility on the road or in the air – this number could increase significantly once again.

"Across industries, there needs to be a dialog about necessary skills, needs, and common standards. In particular, advancing digitalization, sustainability, and the entry of technologies such as artificial intelligence into production require a genuine reskilling approach," says Leopold König, co-founder of the company CUSTOMCELLS, which has sites in Itzehoe and Tübingen. And Torge Thönnessen, co-founder of CUSTOMCELLS adds, "We are happy to take a leadership role here, together with our partners, and make a sustainable investment in the education of our employees and future employees."

The English-languagetech publication "Master of Batteries" is dedicated to a wide range of issues surrounding the topic of battery cells and takes its readers on an exciting journey based on concrete application scenarios – from the tender beginnings of the technology to a present in flux to a tomorrow full of possibilities that companies like CUSTOMCELLS are already working on today. With its contributions, "Master of Batteries" offers interested parties the chance to get to know battery technology beyond its purely technical parameters.

The future theses for Germany's battery industry can be accessed here.