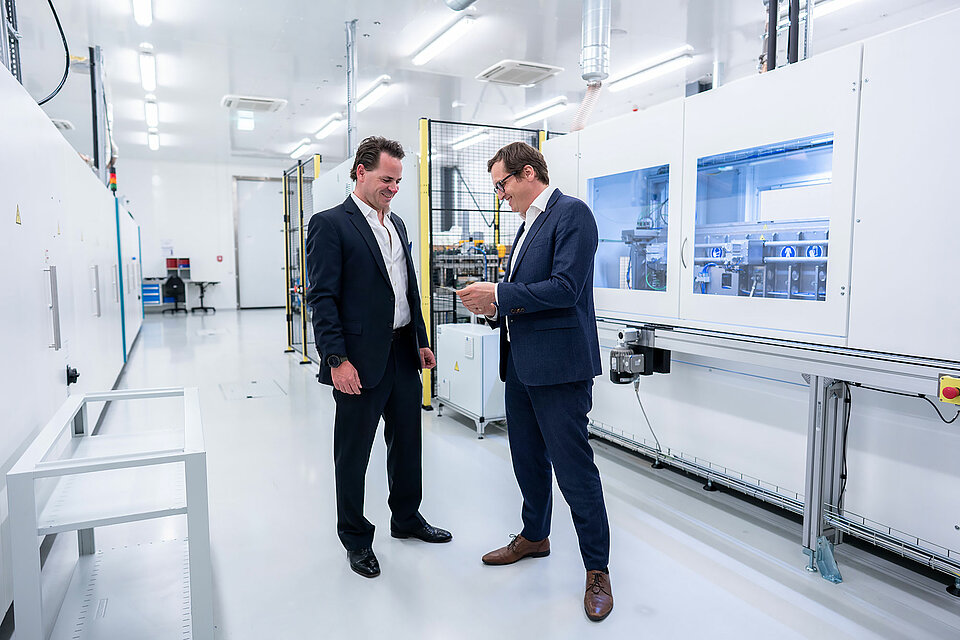 Sustainable cutting-edge technology from Germany: CUSTOMCELLS has successfully concluded an international funding round. As one of the leading companies in the fields of development and series production of special lithium-ion battery cells, CUSTOMCELLS has secured the support of lead investors Vsquared Ventures and 468 Capital. Porsche Ventures joins CUSTOMCELLS as an additional shareholder and financial investor. Even after the funding, CUSTOMCELLS founders Leopold König and Torge Thönnessen will remain majority shareholders of the company, which operates sites in Itzehoe and Tübingen. All shareholders have agreed not to disclose the exact amount of the capital contributions and investments.

“With Vsquared Ventures and 468 Capital, as well as Porsche Ventures, we will have strong partners at our side in the future who will help us to drive the development of CUSTOMCELLS even more decisively – on both the national and international stage,” says Leopold König, CEO and Co-founder of CUSTOMCELLS. “What we are particularly excited about is the spirit that all three of them bring to the table. Just like us, they share a belief in sustainable cutting-edge technology made in Germany. Together, we now have the opportunity to actively shape Germany's future viability and its role in battery cell development and production,” König emphasizes.

Lithium-ion batteries are considered a key technology for numerous industrial sectors, not only for the automotive industry. Applications in niche markets are particularly dependent on fast development and adaptation cycles. CUSTOMCELLS therefore enables customers to develop, prototype and mass-produce high-quality lithium-ion battery cells in small to medium volumes on the basis of flexible manufacturing concepts, as well as through the use of state-of-the-art research and production facilities – tailored to the customer's individual requirements.

“We systematically pursue a strategy of technological, vertical integration through cooperations with the respective ‘best-in-class’ companies in the value chain – from material manufacturers to plant construction firms to recycling specialists,” comments Torge Thönnessen, CEO and Co-founder of CUSTOMCELLS. “In addition, CUSTOMCELLS is constantly scrutinizing processes in cell production with regard to quality, sustainability and rejection rates. To achieve significant improvements here, we are increasingly relying on robotics and artificial intelligence today and in the future.”

The funding from the latest investment round will be used to drive forward the expansion of the Itzehoe and Tübingen sites and to invest in the further development of the company's own technologies and research projects.

Among other things, the new shareholders are taking over the shares of the technology consultancy P3 group, which had joined CUSTOMCELLS® Itzehoe GmbH in 2017. “During this time, we have further developed our site in Tübingen together with P3 as part of the KomVar project and have grown from 20 to 100 employees,” say Leopold König and Torge Thönnessen, expressing their gratitude for the trustful cooperation over the past four years. “In the process, we have been able to consistently follow our path from a Fraunhofer spin-off to an industrial company. P3 has supported us during this time with an important boost in the field of electromobility, which later gave rise to the idea of Cellforce Group GmbH and now, through the reflow of the P3 shares, has cleared the way for this. We respect P3's decision to maintain neutrality and independence in the market, remain closely connected to P3 in business and look forward to further cooperation.”

International expansion with new partners on the side

“Lithium-ion battery cells play a crucial role in decarbonizing mobility – from electric cars to air travel and maritime transport. The shift towards mobility free of local CO2 emissions has begun, but is still limited by the performance of existing batteries,” says Herbert Mangesius, Co-founder of Vsquared Ventures.  “CUSTOMCELLS, a spin-off of the German Fraunhofer-Gesellschaft, has built specialized and unique capabilities over a decade to address these exact performance challenges. We are proud to support this global leader in cell innovation as it scales and builds its business towards large-scale production of new classes of high-performance batteries in Europe,” says Mangesius about the venture capitalist's commitment, which in particular also supports European start-ups in the fields of space, quantum computing or, indeed, battery technology.

“CUSTOMCELLS, with its focus on the development of customized high-tech solutions as well as small and medium production volumes, is making a key contribution to the development of the European battery cell industry. We are convinced that together we can further expand our leading international position in the field of cell technology in the coming years. To this end, we are bringing together our network with the unique know-how of the CUSTOMCELLS team,” says Florian Leibert, General Partner at venture capitalist 468 Capital, which has offices in Berlin and San Francisco. Leibert himself – founder of the Silicon Valley cloud company D2iQ and one of the first leading software developers at Twitter and Airbnb – brings with him many years of experience and resilient contacts in the deep tech and start-up scene in the USA.

Key technology for electric mobility – on the road, and in the maritime and vertical sectors

Porsche Ventures, the venture capitalist of Porsche AG, has also joined CUSTOMCELLS as a new shareholder. “With its expertise in battery cell development, CUSTOMCELLS offers a wide range of potential applications via its investment in Cellforce Group GmbH and the associated synergies, particularly in maritime and vertical electric mobility,” says Dr. Ulrich Thiem of Porsche Ventures. “The investment in CUSTOMCELLS benefits Porsche's battery strategy. In view of the high corporate development potential of CUSTOMCELLS due to a largely entrepreneurial independence, we decided to acquire a stake in CUSTOMCELLS through Porsche Ventures, the corporate venture capital arm of Porsche AG.” The sports car manufacturer's venture capital fund invests in young companies worldwide and has offices in Stuttgart, Palo Alto, Shanghai, Ludwigsburg and Tel Aviv. Just recently, Porsche and CUSTOMCELLS announced the formation of a joint venture – Cellforce Group GmbH.

M.M.Warburg & CO Corporate Finance exclusively advised CUSTOMCELLS in this funding round, as well as in the preceding establishment of a joint venture with Dr. Ing. h.c. F. Porsche AG and a share placement. Further information, as well as images and video material, can be found at http://www.customcells.de/.

468 Capital is a venture capital investor focused on European tech companies. Founded in 2020 by Alexander Kudlich, Florian Leibert and Ludwig Ensthaler, 468 Capital invests in early-stage growth of European tech start-ups from pre-seed to Series B. With offices in Europe and the US, 468 Capital Portfolio also provides companies with strategic support and access to US growth funds in addition to financing.

Porsche Ventures is the venture capital provider of Porsche AG with offices in Stuttgart, Berlin, Tel Aviv, Palo Alto and Shanghai. As an agile unit, Porsche Ventures invests in innovative technologies and business models worldwide and has stakes in around 30 companies. The annual investment framework amounts to €150 million.

P3 is an independent and international management consultancy, which offers engineering services as well as software development for numerous customers and industries. Since its foundation in 1996 in Aachen, P3 has always established subsidiaries, gained experts and employs more than 1,000 people at 17 different locations today. P3 sees itself as an ‘engine’ and develops individual strategies for customers in order to jointly advance new ideas, projects and innovations.