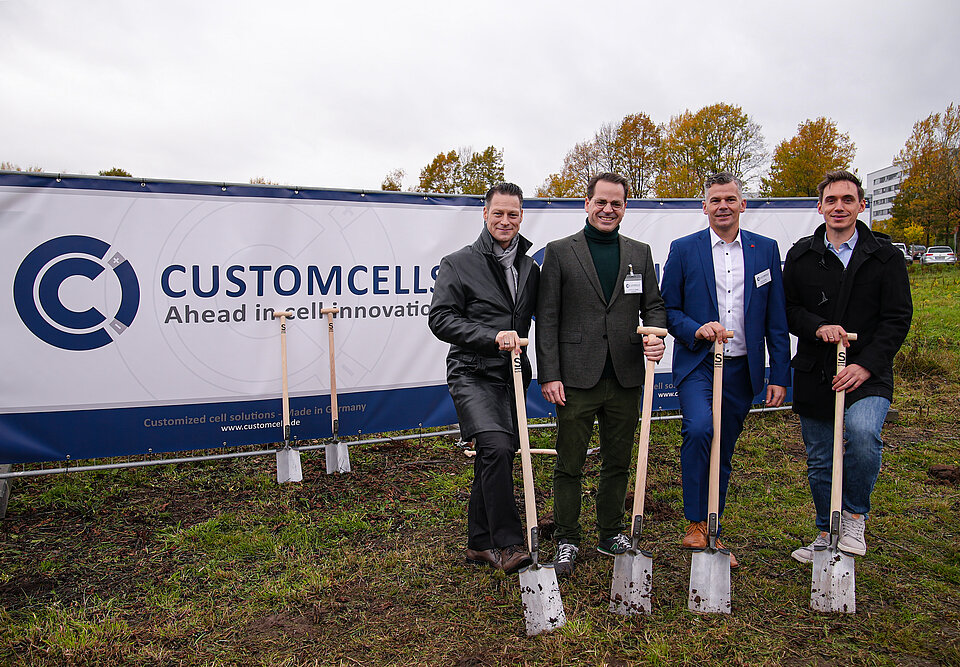 More innovations and patents for Germany's energy and mobility turnaround: with the expansion of its site in Itzehoe, CUSTOMCELLS is significantly expanding the company's capacities in the areas of research and development and small-scale mass production. In the presence of representatives from business and politics, the groundbreaking ceremony was held today for the company's forward-looking new building, which will enable CUSTOMCELLS to grow even faster in the future – all while offering its employees a sustainable and state-of-the-art workplace.

"The success of the mobility transition is very much linked to high-performance batteries – and to ensure that these can be developed and produced in a way that is tailored to the respective customer needs, we at CUSTOMCELLS must grow even faster than before," said Dirk Abendroth, CEO of CUSTOMCELLS Holding at the groundbreaking ceremony. Specifically, the company plans to massively increase the number of patent applications. As early as next year, the battery cell manufacturer intends to file a large number of new patents in the field of battery cell technology. This will also underline the company's position as a premium player in the industry. The new building will help CUSTOMCELLS to keep development speed permanently high – and even to increase it further.

The site on which the modern office building is being built covers an area of 10,251 m², or around one hectare. CUSTOMCELLS has also secured the option to expand the property by an additional 5,749 m² over the next five years. The modern timber construction is being built using element-based, serial, and thus particularly resource-saving construction methods. The timber construction also enables an accelerated construction process, so that the building should be ready for occupancy as early as next late summer. In addition, a production and storage hall will be built on the site along with the new building. Planning for this additional space is already in its advanced stages.

"We have invested significantly in the site over the past few years, establishing new process and plant technology and creating an open, results-oriented mindset in our company. With the expansion of the site, we are now creating the right environment for our team to unleash their full innovative power," says Jan Diekmann, Director of Technology & Operations at CUSTOMCELLS. To this end, the new buildings offer not only additional space but also the possibility of adapting the room layout to future requirements and project needs by means of flexible and movable walls.

An attractive employer creates more value added in the region

The combination of an open working culture, innovative technologies, and modern premises makes CUSTOMCELLS an attractive employer in the region that sees itself as 'powered by people' and is also focusing on growth in terms of the number of employees; by mid-2023, the number of employees in Itzehoe is expected to increase from 90 to more than 160.

"We are bringing the innovative power of Silicon Valley to northern Germany. What was previously only possible in the USA or Asia, we will also implement in the future – for example in the processing of new types of materials. Overall, with the expansion of the site, we are positioning ourselves in a much more resilient way, creating more depth of added value in the region – and ultimately more growth," says Benno Leuthner, Managing Director of CUSTOMCELLS Itzehoe. Instead of working primarily on a project basis, the team at the Itzehoe site will increasingly focus on the development and small-scale mass production of its own products in the future.

"With CUSTOMCELLS, a leading company of a highly demanded future technology is based in Itzehoe. We are very pleased that this will continue to be the case," said Ralf Hoppe, Mayor of Itzehoe, during the joint groundbreaking ceremony. "The construction of the three-story office building, which is already underway, and now the construction of the production hall and warehouse are a clear commitment to the Itzehoe location. The successful development of CUSTOMCELLS shows what is possible here in the innovation area. The company has played a major role in ensuring that Itzehoe is perceived throughout Germany as a hotspot for storage technology and cutting-edge research. We are grateful for this, because the entire region benefits from the impulses emanating from this innovation space."

The CUSTOMCELLS site is already powered 100 percent by electricity from renewable sources. In addition, the company plans to set up e-charging stations on the plant premises in order to be able to comprehensively promote sustainable mobility among its own employees as well.