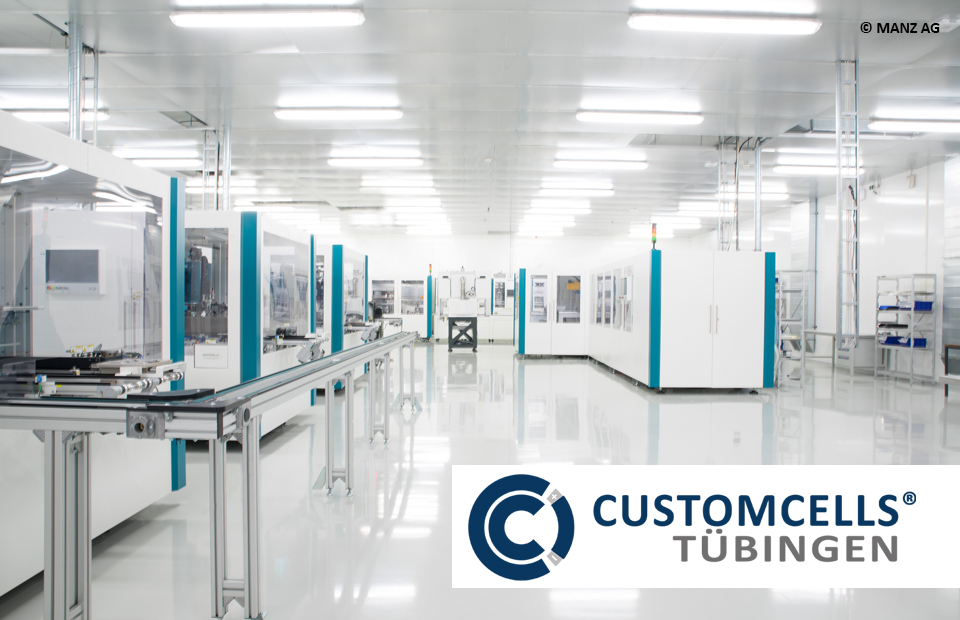 At the new CUSTOMCELLS® production site, a flexible demonstrator cell production line for high-quality lithium-ion battery cells in moderate cell geometries in small to medium volumes will be developed and set up during the two-year project period.

The partners CUSTOMCELLS® Itzehoe GmbH, CUSTOMCELLS® Tübingen GmbH, P3 automotive and the Zentrum für Sonnenenergie- und Wasserstoff-Forschung Baden-Württemberg (ZSW) together with the associated partners Daimler AG, Manz AG and ANDREAS STIHL AG & Co. KG officially launched the KomVar project "Competitive Variant Production for Lithium Accumulators" sponsored by the German Federal Ministry of Economics and Energy (BMWi). The overall project is being promoted by the partners and the BMWi with a financial volume of 8.2 million euros.

The plants should be able to produce various cell designs and cell technologies in mass production quality despite small and medium quantities. In cell production runs, different cell types will be produced in small series of up to 1,000 pieces and a maximum of 200 mm x 200 mm during the project period and their quality and manufacturing costs will be checked. Data on throughput, changeover times, consumption and costs are recorded and evaluated during plant evaluation. These data flow into the development of an economic efficiency concept, which at the end of the project should give knowledge about the general marketability of the concept.

Lithium-ion batteries are considered a key technology for many areas of industry. Numerous energy-autonomous products are already differentiated today by the quality of the energy storage device, with the predominant performance advantage being attributable to the lithium-ion battery cell used. In addition to large-volume consumer products and increasingly important applications in electric vehicles, lithium-ion battery cells are increasingly being used by niche markets that are dependent on rapid development and adaptation cycles for their products - on the possibility of having cells developed and produced in small quantities according to specific specifications and performance parameters. Industrial partners, especially in the pre-development and prototype stages, also rely on such a plus in flexibility.

The project represents an important next step for the establishment of a German and European battery cell industry by taking up research and development results from basic projects and bringing them closer to an entrepreneurial application. By focusing on small and medium-sized production volumes, it ideally links up with existing projects to establish large-scale production of lithium-ion battery cells in Germany and Europe. In addition, know-how will be generated and jobs created.