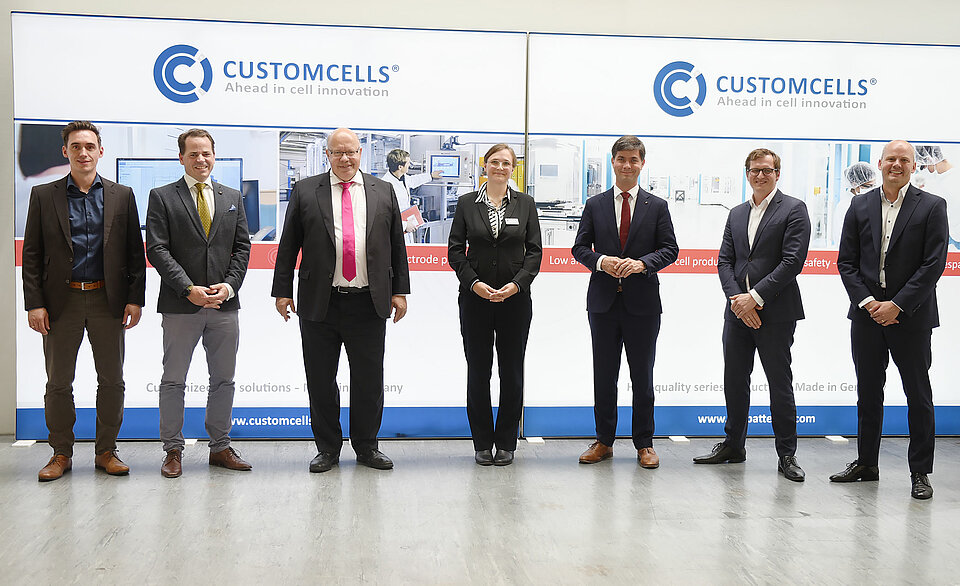 As part of his tour of Germany, Peter Altmaier, Federal Minister for Economic Affairs and Energy, today visited CUSTOMCELLS® in Itzehoe. Together with CDU Member of the Federal Parliament Mark Helfrich, Altmaier familiarized himself with the progress CUSTOMCELLS® has made in the areas of research and development as well as series production of special lithium-ion battery cells, which the Itzehoe-based company with locations in Schleswig-Holstein and Tübingen is one of the leading companies in Europe in, making innovation 'Made in Germany' a reality. Only recently, CUSTOMCELLS® announced a joint venture with Porsche AG and brought three new shareholders on board to drive internationalization.

"Electromobility - whether on the road, in the water or in the air - plays a decisive role in achieving our climate targets as well as the future viability of Germany as an industrial location. A particular focus of us as the German government is on the development of battery technology, which is why we have been strategically supporting the establishment of battery cell production in Germany since 2018," Altmaier said during his visit to Itzehoe. "Our goal is clear: We want to produce the world's most powerful, smartest and most sustainable batteries in Germany. Highly innovative companies like CUSTOMCELLS® show that this is possible, and with their scientific expertise make an important contribution to our technological sovereignty."

CUSTOMCELLS® enables its customers to develop, prototype and mass-produce high-quality lithium-ion battery cells in small to medium volumes - tailored to the customer's specific requirements - on the basis of flexible manufacturing concepts and by using state-of-the-art research and production facilities. Federal Minister Altmaier particularly praised the intensive research work that CUSTOMCELLS® is driving forward in association with numerous interdisciplinary partners in public cooperation projects: "The prosperity of future generations is based on the investments in research and development that we are launching today."

In projects such as SOLIFLY, HiQ-Carb and RoSiLib, CUSTOMCELLS® is working together with national and European partners on materials and concepts for future battery cells that can, for example, be used in new types of electric aircraft.

CDU Member of the Federal Parliament Mark Helfrich, who has represented the Steinburg, Dithmarschen South and Bad Bramstedt region in the Bundestag since 2013, said, "As part of the Energy Coast, CUSTOMCELLS® underscores the pioneering role that the True North and especially the West Coast of Schleswig-Holstein play in renewable energies. The company is a flagship for the region and evidence of Itzehoe's position as a deep-tech location with national appeal."

During their visit, Federal Minister Altmaier as well as Member of the Bundestag Helfrich were impressed by the rapid development CUSTOMCELLS® has taken since it was spun off from the Fraunhofer Institute for Silicon Technology ISIT in 2012. In addition to the site in Itzehoe, CUSTOMCELLS® now maintains one of the most modern cell production lines in Europe in Tübingen, where it enables series production of small and medium volumes.

Together with Porsche AG, CUSTOMCELLS® recently established Cellforce Group GmbH as a joint venture and is entering the production of high-performance battery cells. As the main supplier of the start-up Lilium, CUSTOMCELLS® is also further developing the aviation company's existing battery technology to series production readiness, which it will produce at its plant in Tübingen going forward on a tailor-made basis using modern high-tech solutions. CUSTOMCELLS® only recently secured the support of investors Vsquared Ventures and 468 Capital. Porsche Ventures has also joined as a financial investor. CUSTOMCELLS® founders Leopold König and Torge Thönnessen will remain majority shareholders of the company after the funding.

CUSTOMCELLS® co-founder Torge Thönnessen during the visit of Peter Altmaier and Mark Helfrich: "With our scientific approach and our development capabilities, we want to advance the battery-based electrification of a wide range of industries. The feedback from the Federal Minister shows us that we are on the right track, which we will pursue even more resolutely going forward and further expand our sites in Itzehoe and Tübingen."

CUSTOMCELLS® co-founder and CEO Leopold König: "At CUSTOMCELLS, we have always taken a start-up approach: In addition to expertise in cell technology and production, this also means agile, fast action and a willingness to enter into strong partnerships. This is increasingly paying off and helping us achieve our goal of moving Germany on the path to greater sustainability even quicker."