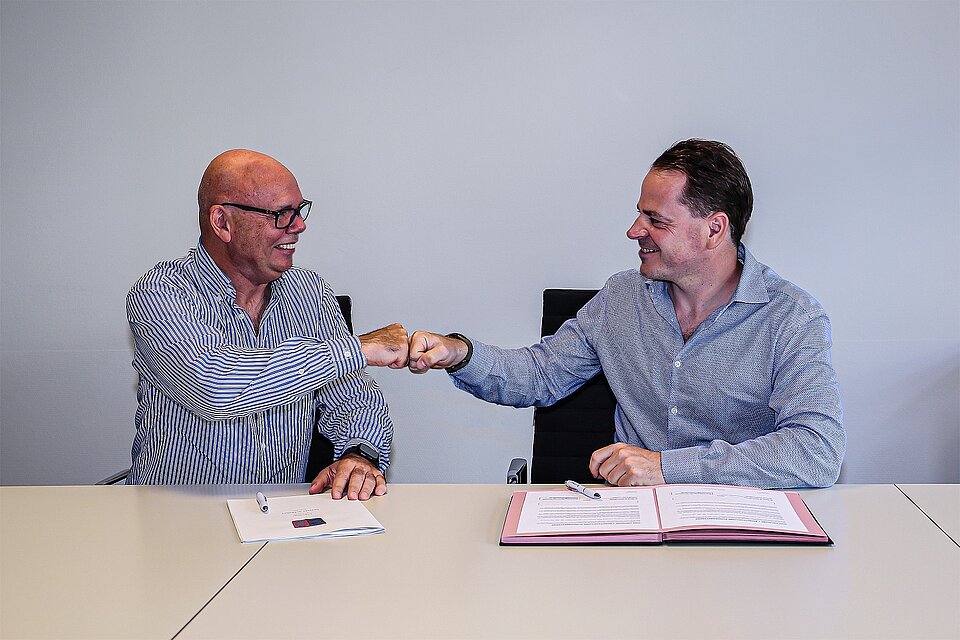 Flexible working, strategic growth: CUSTOMCELLS®, one of the leading companies in the development and series production of state-of-the-art lithium-ion battery cells, is expanding its site in Itzehoe. With a modern, sustainable office complex in innovative timber construction, the company is creating a new working environment for a growing number of employees - and is also making a long-term commitment to the city of Itzehoe and the energy coast of Schleswig-Holstein.

In the presence of Ralph Busch, First City Councilor and Deputy Mayor of the City of Itzehoe, Leopold König, Co-Founder and Managing Director of CUSTOMCELLS®, today signed the purchase agreement for a new plot of land in Fraunhofer Straße in Itzehoe. The acquired property covers an area of 10,251 m², or about one hectare. The contract includes an option for an expansion by an additional 5,749 m² within the next five years. The municipality and CUSTOMCELLS® have agreed not to disclose the purchase price.

With the new building, CUSTOMCELLS® underlines its claim to think and act in terms of sustainability along the entire value chain. The modern timber construction is built in a modular, serial and thus particularly resource-saving construction method. With Schütt Holzbau, CUSTOMCELLS® was able to win a reliable and high-performance partner from the region, which prefabricates construction elements in its own factory and thus shortens the construction time. The CUSTOMCELLS® site is already powered 100 percent by electricity from renewable energies - typical for the energy coast of Schleswig-Holstein. In the future, the company also plans to install e-charging stations on the factory premises in order to be able to comprehensively promote sustainable mobility among its own employees as well.

"We have found the city of Itzehoe to be a fair partner in this project over the past few months, supporting us in many ways and pulling together with us. In the end, we are all united by one desire: We want to advance electrification - on the road, in the air, on and under the water, and in the manufacturing industry. Application-specific battery cells are the key technology for this," says Leopold König.

"The expansion of CUSTOMCELLS® is a clear commitment to the Itzehoe site, which we are very pleased about. In the innovation area, this will provide further new impetus for the entire region. It encourages us to further expand inter-municipal cooperation," says Ralph Busch, First City Councilor and Deputy Mayor of Itzehoe. The city's economic development officer Thomas Carstens adds: "CUSTOMCELLS® is not only an important factor for our regional community and business location as an employer, but this expansion will also significantly strengthen the storage technology cluster that already exists with important research and industrialization partners in the Itzehoe area."

Sustainable growth at the Itzehoe site

CUSTOMCELLS® currently employs around 110 people at the Itzehoe site. By mid-2023, their number is expected to increase to up to 160 people. In addition to the increase in space, the new building also creates the opportunity to implement a new-work office concept and, for example, to be able to react to future requirements in terms of room layout by means of flexibly movable walls.   Specifically, the work concept is to include a combination of desk sharing and mobile working, while at the same time creating shared spaces for meetings and cross-company exchanges.

"CUSTOMCELLS® is 'powered by People' - and has been for almost ten years. Our business is driven by the ideas of our employees.  A good team is comparable to the world's best battery cells. Only when the chemistry is right and the teamwork as a whole is right can outstanding performance be achieved. But in the end, this also requires the right premises, which we are now sustainably creating with the new building at the Itzehoe site," comments Dr. Dirk Abendroth, CEO of the CUSTOMCELLS® Group since May of this year.

Tight schedule: Production and storage hall to follow by 2024

Groundbreaking for the three-story office building is scheduled for August 2022. The building should be ready for occupancy within a year. In a second construction phase, production and storage facilities will be built on the site. Concrete planning for this will begin at the end of the year. Construction is scheduled to start on the hall in 2023, and the machines are expected to be ready for occupation in early 2024. The existing premises in Fraunhofer Strasse, where CUSTOMCELLS® is a tenant, will be retained, but a temporary container will be dissolved in the course of the new construction.

For the new building, CUSTOMCELLS® has applied for funding through the state program for the economy and thus hopes to receive funds from the joint task "Improvement of the regional economic structure" (GRW).