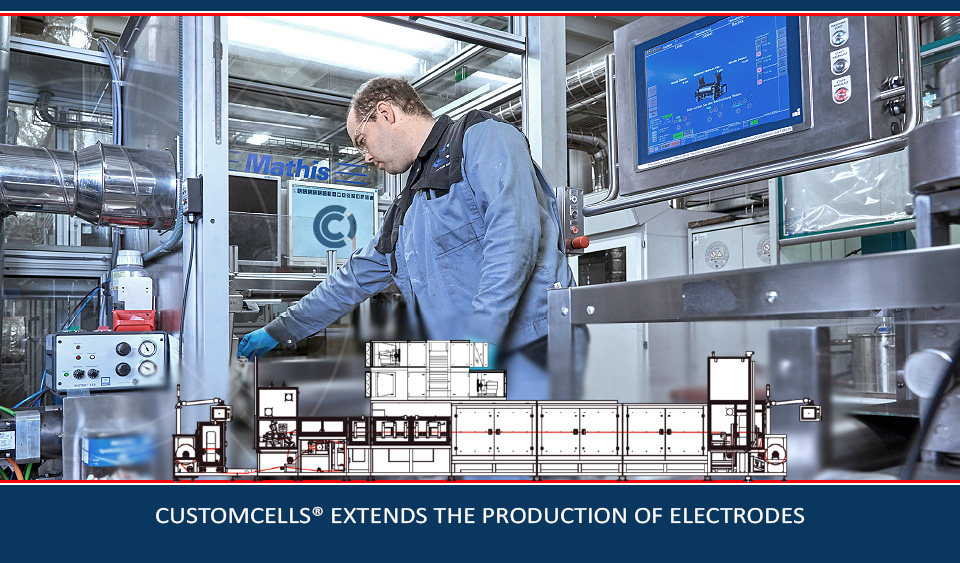 CUSTOMCELLS® installs a further coating plant for the industrial production of electrodes.

COMMISSIONING OF THE SECOND COATING LINE

CUSTOMCELLS® installs a further coating plant for the industrial production of lithium-ion electrodes. The main objective is to further optimize the production process of the negative and positive electrodes and to process the production of anodes and cathodes completely separately in the future, in order to eliminate the existing risk of so-called cross-contamination. This contamination can occur, for example, during the incomplete cleaning of a plant in the course of conversion due to the presence of transition metal ions on the graphite electrode. In addition, the cleaning or conversion times are minimized immensely - while at the same time the production capacity is significantly increased.

The separation of the production processes - also the spatial separation in the context of the production of the electrode pastes - is essential in the context of electrode production to ensure high performance of the lithium ion electrodes. On the basis of the new coating plant, CUSTOMCELLS® combines a high-quality electrode coating with a high degree of flexibility in terms of mass loading, substrates, active materials and solvents. Electrode coils based on electrode pastes can be processed and developed, which are based on water or organic solvents. Some of the cathodes processed with organic solvents have already been converted to aqueous systems in the course of sustainability. CUSTOMCELLS® has already established electrode paste formulations with more than 14 different active materials on the market. CUSTOMCELLS® thus continues to invest in the future and guarantees the optimum processing of newly developed materials.

The new coating line from MATHIS includes two inline quality assurance systems: a camera system for measuring offset deviation and controlling the tab width, and a system for measuring wet and dry electrode loading by means of ultrasound. With the new production plant, CUSTOMCELLS® can more than double its annual production output in the field of electrode manufacturing.

WHY IS THERE A DROP IN PERFORMANCE OF LITHIUM-ION BATTERIES?

The electrochemical performance drop during the lifetime of lithium-ion batteries is unavoidable and ultimately due to chemical processes at the electrodes and the electrode/electrolyte interfaces. The operating conditions to which the cell is exposed during its lifetime have a major influence on ageing. These include voltage cut-off limits, charge and discharge rates and the temperature window. At the negative electrode (usually graphite), accelerated ageing is often determined either by the dissolution or new formation of the solid-electrolyte intermediate phase, a passivation layer that forms at the negative electrode/electrolyte interface, at higher temperatures or by lithium metallization.

In contrast, the performance deterioration at the positive electrode is mostly due to the partial dissolution of the transition metal ions of the cathode active material in the electrolyte or by the reaction with the electrolyte, which is additionally promoted by increased temperatures and high cut-off potentials. In addition to the destruction and the loss of capacity of the positive electrode material itself, the interference of the dissolved transition metal ions in connection with the negative electrode is a serious challenge, which can lead to blocked diffusion paths on the graphite surface and thus to an increase in the internal cell resistance.

The above considerations show that battery ageing is due to multiple and complex failure mechanisms. In order to reduce the number of possible sources of failure mechanisms, the cell manufacturing process, including high-quality electrode production, is of great importance for ensuring our CUSTOMCELLS® quality standards.

Please communicate your interest to our CUSTOMCELLS® sales team at +49 4821 133 92 00 or contact@customcells.org. Mr. Jörg Scheele will be happy to answer your detailed questions. We would be pleased to provide you with further information on our electrode windings and, if required, will be pleased to prepare an individual offer for you.